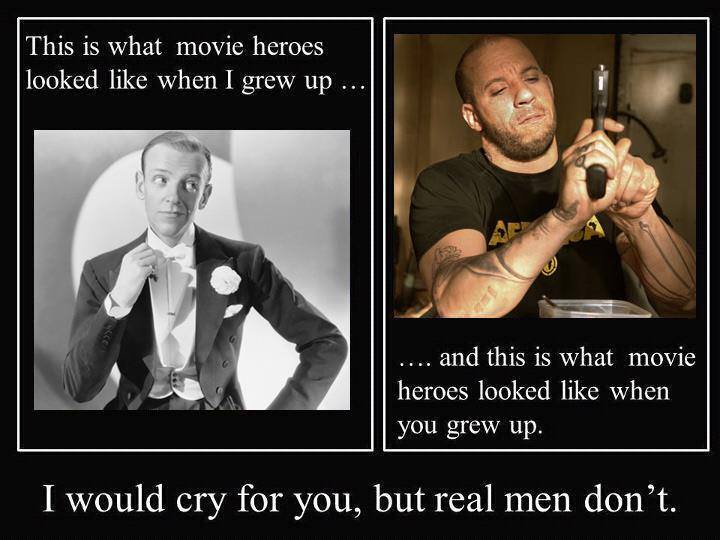 “It is curious how we have come to a time of idealized hypermasculinity. Now more than ever, media shows us men very muscular, toned and fit, and capable of withstanding and delivering more and more brutal violence than ever before. Looking back to the idealized decades and centuries before, people were in reality, in some ways likely more resistant, while in other ways likely less so, but the concept of manhood was quite different to how it is perceived today, and quite a bit less focused on muscles and raw violence. Just going back to the 60s and 70s shows how even the hero at times is knocked out by a single punch and by comparison is commonly quite skinny or chubby compared to today’s ‘heros’.

And the violence was commonly extremely tame in comparison to the extended scenes of blood and assault of even standard dramas of the current time, now constantly pushing the edges. Of course one aspect of hypermasculinity peaked already in the 90s with the new bodybuilding and martial arts subcultures, but other aspects continue, not least with a hypermasculinity tied to never displaying emotion, and not shying away from the most brutal of violence or even cruelty. We seem to, with a few rare exceptions, be moving away from the clever and witty hero, who acts with compassion and solves issues using his intelligence, as opposed to the simple, brutal and violent nature of the evil and criminal protagonists. It’s a move away from inner greatness, to outer one. From the strength of the righteous, to the righteousness of the strong.

And while it is true that for a large part of our history, a certain readiness for violence has been part of some aspects of idealized manhood, especially in burgher and aristocratic context, it was a tempered and controlled violence, to be governed by noble judgment, and only used with just cause, and not more than required, and in real life hotly debated as this commonly failed. In contrast to that, we have now for decades seen a shift towards an admiration for the capacity of violence and cruelty itself, both in media and in real life, with street gangs seeking to humiliate their victims rather than robbing them, with the cruelty being idolized.

Likewise, the male touch is now mostly restricted to across the genders, and to close family, and while it for a time has been changing and is different with some younger generations, there is also a backlash against it. Going back some 70 years however, men touching male friends in what would now be considered quite intimate ways was a common thing. Today, many generations of men struggle to even touch or comfort a male friend who really needs it. Touching is primarily sexualized. And combined with the much greater awareness of pedophiles, even touching a child in need is something which a man can now hesitate before.
And the same is true for male crying in public. Male crying was for large parts of our history even regarded as a noble and good thing, and admired and celebrated, not seen as something to be ashamed of or to hide, but rather be proud of, and something to display in public, as it showed passion and compassion.

Part of this is of course a counterreaction to the changing views of gender and roles, with a growing need for men to publicly define who and what they are, out of fear of becoming perceived as something they don’t want to be perceived as. It used to be far simpler, with pretty much only one option, while today, things are more complex.
This counterreaction is also part of ideological and political changes, seeking to rewind the tape to ‘simpler times’, removing the cause for this need of definition.

In a way, with the broader acceptance of a wider range of accepted lifestyles for both men and women, we appear to also have lost something vital in the move towards hypermasculinity, i.e. the softer and more humane manhood that we had for centuries, a manhood not revolving around muscles, violence and brutality, but around compassion, bravery, cleverness, knowledge and fortitude. And this loss is a result, not of the change, but from the fear of the change. It is sad and worrying, but also something quite certain to change again, as our perception of what it means to be a good and decent man and woman has always been in constant change.”