On modern and classical art

So, modern art sucks in comparison to medieval and Renaissance art, huh? I strongly disagree for a number of reasons.

First, of all what we consider art and artists were not quite what we define them as today. Most art was illustrative, depicting scenes, or more importantly, portraits, and made on order from the rich or the Church. And much of it was also quite topically boring, with little relevance today outside of its display of technical skill. It has mostly lost its original meaning to people who today largely admire it for very different reasons. What once carried meaning through its symbolism and intentional references, has become merely decorative and “pretty”. That said, there is still a great amount of artwork from history that is important and valuable for a great many different reasons.

Still, these pieces of art were painted by painters, not artists, which was a proper *profession*, like any craftsmen in the guilds. And this required study of technique and knowing certain symbolism. And it was strictly regulated by conventions, where even slight derivations from these were considered grave. This was true for centuries. Durer’s use of the divine frontal stance for his self-portrait is just one such at the time very controversial example. Early modern art, like Van Gogh’s Potato Eaters and Manet’s Olympia are examples of the same, considered quite harmless and even beautiful today. Controversial artwork was not seldom assaulted and burned or otherwise ruined.

Art in the medieval and Renaissance period too could be quite ugly and even surreal at times. And certainly also bad, even if it would be far more difficult to sell, and little of the bad art remains for us to see today, although you can certainly find it of you look for it. There are a whole lot of technically skilled but merely decorative doodles with no real value. It just doesn’t get displayed at museums.

And the depictions of the madness of the times, with war and slaughter are still often quite disturbing. In fact, it could be argued that the seeds of modern art are to be found in this period already, first stepping away from the divine and beautification towards the real and objectivity, towards science, and later towards subjectivity and experience, although one could also argue that there is no single point in history but a continuous evolution that could not happen any differently.

However, with the invention of photography, much of this becomes, not irrelevant, but far less important and interesting. Why paint realistically, when you can take a quick picture of the same? It is no coincidence that this period of early photography also launches an explosion of art movements, and we are all the richer for it. This is where artistry really become defined as a concept, as interpreters and expressors of thought, filtered through their personalities and leading to impressionism, expressionism, pointillism, surrealism, cubism, futurism, dadaism, etc, etc. Another great misunderstanding is that modern artists can’t paint. A great many of them were/are schooled in realism first, but then choose to do other, to them and others, more interesting things. They are perfectly capable of realism though, which you easily see when browsing their body of work.

Of course, the fascists and the nazis hated the modern art and modernism, with all it stood for, and I am very glad they lost the war. Personally, I am very happy that our global culture is so rich and has evolved the way it has in this respect, with a fantastic diversity in expression and flavour. I feel the same about food. I would hate to live on mostly grain and potatos, with the rare chance of fish and meat, which was the traditional sustenance for the common man, for much of our history.

And some loose comments from debating this: I also do think that quality is a difficult thing to measure and it is about more than just technique. It is about having a feeling, an “eye” for it, that works on symmetry/asymmetry, on composition and extension of lines and relationship between elements, about colour, contrast and complement. All of these things combine into giving quality.

Of course it is easier to hide lack of skill with non-realistic art. Quality though, is not really easier to provide.

Also, we mustn’t confuse decorative art with meaningful art. This mistake I think is very common. Non-figurative art is commonly more akin to ornamental art in history, which is a type of art that is over-abundant, but little discussed and known by most people.

I too think comics are a bit of a forgotten kind of art in this and I have a deep respect for it, not least the more serious works where years are spent on each book, working in water colours etc. Framed, much of it would be considered pure, traditional art.

Modern art is a loose definition these days though. The majority of the works shown above are all considered “modern art”, and the borders are fuzzy towards the Renaissance and the Middle Ages in some cases… People tend to think more about boobs dipped in paint and pressed against canvas though. 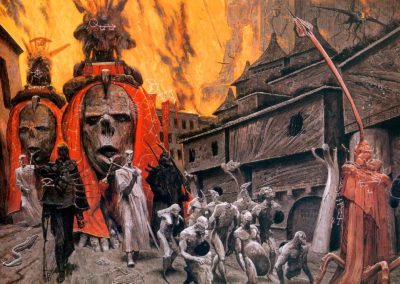