On the Aegishjalmur and the Vegvisir 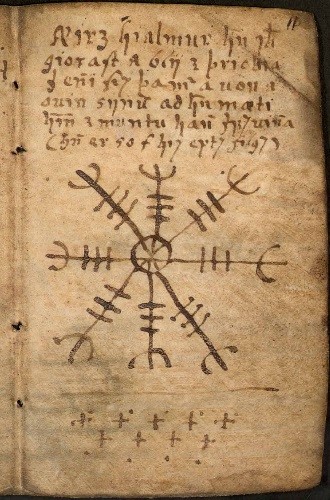 Just a comment since I know symbols like the Aegishjalmur and the Vegvisir are popular motifs for norse-inspired tattoos.

To my knowledge, the absolute majority of these date to 17th century and later, like the Aegishjalmur from 1670AD, with a rare few symbols stretching back to 14th century and some, like the Vegvisir, dating to the second half of the 1800s. While indeed icelandic, they are just a bit more “viking” than Shakespeare, but not by much.

Magical runes existed earlier of course, but that is something different to this and many were changed in the 19th century. The tradition of magical symbols was also popular all over Europe in the Renaissance and seen in for instance the fencing treatise of Achille Marozzo.

They are still fantastic, but I think it is important to know what they are.